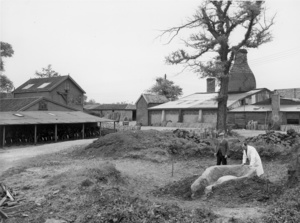 As you may know, the Romans had an army of occupation in England from the 1st to the 4th Century A.D. Establishing a bridgehead on the south coast in A.D. 43 they gradually spread north and east reaching East Anglia early in their occupation.

When they came to Wattisfield the Bronze Age and Iron Age potters had already been using the local clay for nearly 2,000 years. The kiln shown here was one of upwards of a dozen grouped on a site less than half a mile from here. Well over 20 similar kilns have been identified within a 1.5 mile radius of this pottery.

This kiln would have been fired with wood and brushwood to around 900oC. A firing load of assorted sizes might consist of between 400 and 500 pieces. The dome would be formed with soft clay slabs and suitable vent holes left for firing draught and control. This type of kiln could easily be packed with fairly large pots at its base to form a flue for firing draught and heat circulation and a floor would not be essential.